An extension of the “Built Beyond Belief” concept of the original Ninja H2, the new Ninja H2 Carbon benefits from engine updates that increase maximum power to 231 PS† – making these supercharged supersport machines Kawasaki’s most powerful street models ever.
† This engine is rated in PS power units. Gross power is different from net power. Net power is generally less than gross, but varies with engine specifications. Gross power is a general measure to compare one engine to another, as to its overall capacity. Your specific engine net power rating will be different and most likely less than the rated power. As of August 2018 (per Kawasaki market research)

† This engine is rated in PS power units. Gross power is different from net power. Net power is generally less than gross, but varies with engine specifications. Gross power is a general measure to compare one engine to another, as to its overall capacity. Your specific engine net power rating will be different and most likely less than the rated power. † † As of August 2018 (per Kawasaki market research)

Feedback from the Balanced Supercharged engine of the Ninja H2 SX delivers increased engine efficiency. This results in fuel efficiency on par with its predecessor, despite an approximately 15% increase in power. Key components from the Ninja H2 SX include: air filter, intake chamber, and spark plugs.

The supercharger used in the Ninja H2 was designed by Kawasaki motorcycle engine designers with assistance from other companies within the KHI Group, namely the Gas Turbine & Machinery Company, Aerospace Company, and Corporate Technology Division. Designing the supercharger in-house allowed it to be developed to perfectly match the engine characteristics of the Ninja H2 Carbon. The highly efficient, motorcycle-specific supercharger was the key to achieving the maximum power and the intense acceleration that engineers wanted to offer.

The engine was painstakingly crafted to accommodate  the extreme air pressure created by a supercharger,  Cast (rather than forged) through a unique process, the pistons of the Ninja H2 Carbon are lightweight - yet strong - and able to withstand extremely high temperatures. The precision-honed combustion chamber is complemented by a flat piston crown inspired by technology from KHI's Gas Turbine & Machinery Company that helps prevent detonation.

The Ninja H2 Carbon compact IMU operates in 6 DOF (degrees of freedom): 5 measured 1 calculated. Combined with Kawasaki’s proprietary dynamic modelling program, input from the IMU enables even more precise chassis orientation awareness, the key to bringing Kawasaki’s electronics to the next level. The use of Bosch’s compact IMU allows an additional layer of precision to be added to the already high-level S-KTRC, KLCM and KIBS. A cornering managment function uses KIBS and S-KTRIC to assist riders in tracing their intended line through the corner (ABS models only).

KYB AOS-II high quality racing suspension is fitted to the Ninja H2 Carbon. Based on the Air-Oil Separate cartridge fork developed for motocross racing, this design was the industry’s first use of this high-performance racing suspension on an on-road motorcycle. DLC coated inner tubes are designed for low friction, the ø43 mm front fork offers superb action: smooth initial action is followed by strong damping at the end of the stroke.

To facilitate smooth, quick shifting, a dog-ring type transmission was selected. This is the kind of transmission commonly found in MotoGP or Formula 1, and was developed with feedback from the Kawasaki Racing Team.

Because the dog rings are much lighter than transmission gears, this type of transmission offers a much lighter shift effort. Shift touch is also improved, and a much shorter shift time is possible—which facilitates quick acceleration.

In the interest of keeping the engine compact and simple, a single lubrication system provides cooling oil for the engine components, supercharger and transmission.

Oil jets lubricate the supercharger chain at the contact points (two places) where the chain meets the upper and lower gears.

In addition to the two oil jets, the supercharger drive train’s lower gear has an oil passage.

Inside the engine, there are two oil jets per cylinder to ensure the hot pistons are effectively cooled.

Transmission oil jets (first use in a Kawasaki motorcycle) enable a compact transmission with high durability.

The green trellis frame is retained for Ninja H2 Carbon

Although the Ninja H2 Carbon’s high performance cannot be denied, since it was not intended to be a race bike designed to turn quick lap times as efficiently as possible, it did not need the spartan accommodation found on most purpose-built supersport models. The man-machine interface enables riders to enjoy the bike’s performance with a modicum of comfort. While the riding position, ergonomics and cockpit layout were all designed first and foremost to put the rider in the best position to control this amazing machine, the impression from the rider’s perspective is one not of austerity, but rather plush quality, high-tech control, and an impeccable fit and finish. 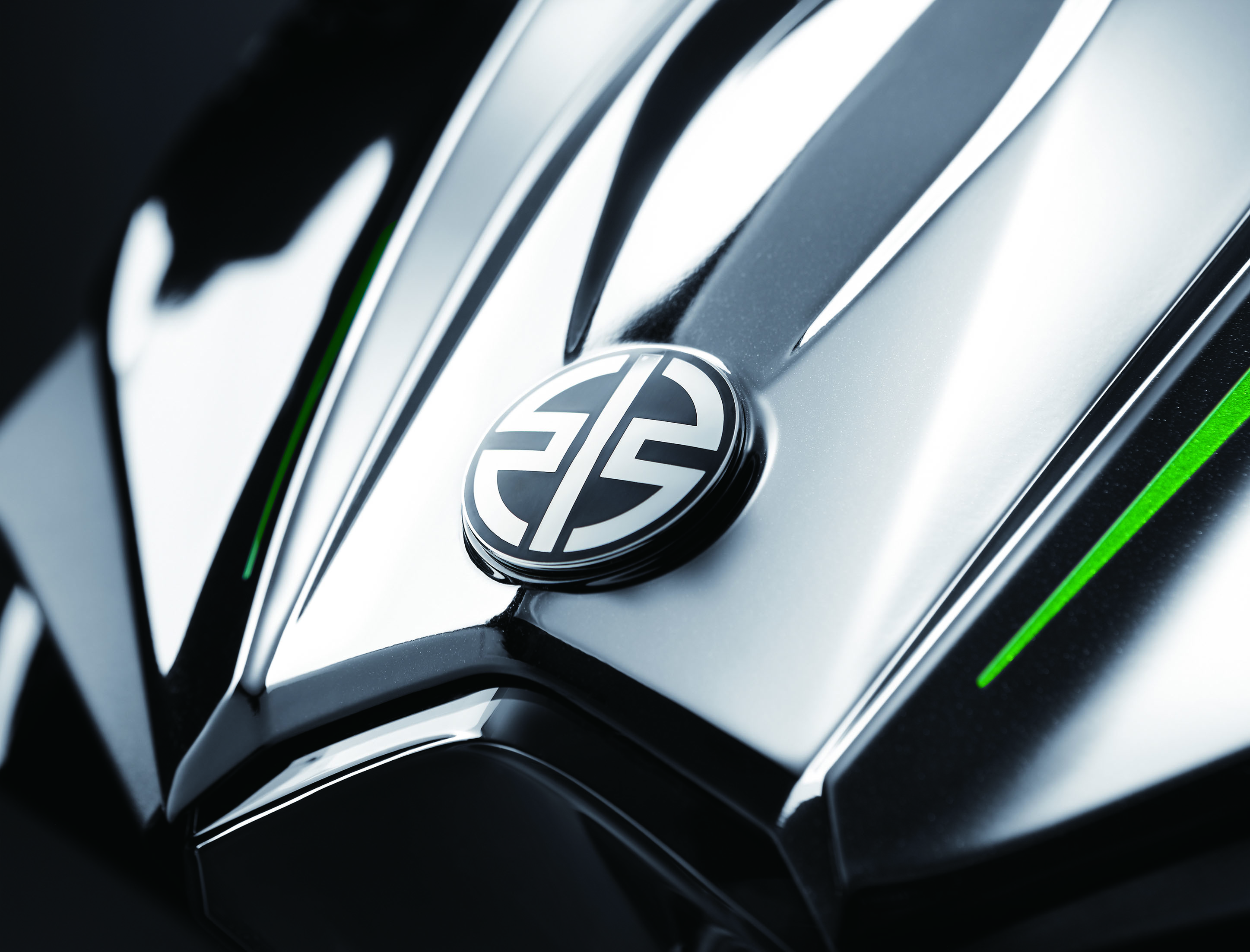 Unlike a standard mass-production model, the high-precision production of the Ninja H2 Carbon requires greater hands-on participation by skilled Kawasaki craftsmen. Each step, from metalworking, treatment, welding, painting to assembly, fine-tuning and inspection is carefully attended to in order to create a product of superior quality. Within Kawasaki’s Akashi Factory, production takes place in an area dedicated exclusively to the Ninja H2 Carbon.